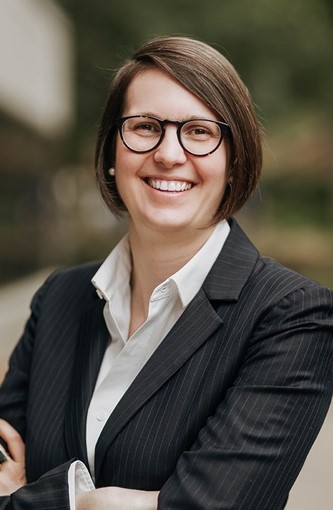 Stephanie received her undergraduate degrees in English and Psychology from the University of North Carolina at Chapel Hill and her Juris Doctorate from the North Carolina Central University School of Law in 2010.  Prior to joining HLB, Stephanie worked as a trial attorney for Legal Aid of North Carolina where she represented indigent clients in District and Superior Court on a wide range of civil cases including landlord-tenant, subsidized housing, contract, domestic violence, child custody, estates, employment benefits, will caveat, and mortgage foreclosure matters.  After 4 years of zealous advocacy at Legal Aid, Stephanie accepted a position representing large, multifamily landlords and property management companies across North Carolina for whom she filed and litigated thousands of Small Claims and District Court evictions across North Carolina.

Stephanie joined HLB in October of 2015, where she now focuses her litigation practice on evictions, landlord matters, and real property disputes in Wake, Durham, Johnston, Orange, and Franklin Counties.  Stephanie regularly drafts leases, contracts, and demand letters, advises landlords, owners, and management companies on conventional housing, subsidized housing, fair housing, and other complex landlord-tenant and occupancy issues, litigates security deposit, contract, and other civil disputes, and provides appellate representation.  Despite her extensive litigation background, Stephanie understands and appreciates the practical importance of amicable resolutions.  As a result, Stephanie works to strategically, effectively, and diligently negotiate fair, favorable settlements so that her clients’ costs are minimized, court expenses and public resources are conserved, and unnecessary litigation is avoided where possible.  In addition to her trial experience, Stephanie also regularly teaches landlord-tenant seminars for the City of Raleigh and property management associations.

Stephanie received the NCCU School of Law H.M. Michaux Award for Public Service, the UNC School of Law Pro Bono Publico Award, the N.C. State Bar Pro Bono Service Award, and the Capital City Sertoma Club Service to Mankind Award for her significant pro bono and community involvement.  Among many of those public service commitments, Stephanie has advocated for abused and neglected children as a volunteer through the Guardian ad Litem Program for over 10 years.  In December of 2015, Stephanie was elected by her peers to serve as a member of the Board of Directors for the 10th Judicial District and the Wake County Bar Association for a three-year term from 2016-2018 and, in April of 2017, Stephanie was honored to receive the Charles B. Hunt Award from the Young Lawyers Division of the Wake County Bar Association.  Stephanie is actively involved with several committees of the Wake County Bar Association, is the Secretary of the Susie Sharp Inn of Court, and, during any other free time, enjoys traveling and watching UNC basketball.

Co-Author, “The Intersection of Housing and Domestic Violence: An Overview of Which ‘Court Orders’ Apply When (Part One),” Apartment Times Magazine for the Greater Charlotte Apartment Association (Mar./Apr. 2015, at 9-10)